When I adopted Daisy in 2008, I knew we were going to be best friends. And our friendship has not disappointed. I’ve hiked with Daisy across several states, joined her on hundreds of walks around the block and comforted her when she was scared. In turn, Daisy served as a companion in the wake of one of the most difficult times in my life – in six months I was laid off from a job, my grandfather died and I ended a long-term relationship. Daisy was there when I didn’t want to get out of bed in the morning and she depended on me for walks, food and companionship. In short, she saved me from falling into a deep depression.

Daisy’s the strong and silent type. I still remember how my mom recounted Daisy’s first “woof.” Her dog Angel, a pro at these sorts of things, was barking her head off at something outside. According to my mother, my handsome black Labrador/pit bull mix sat beside Angel and let out a single quiet “woof” to chime in. Daisy may be relatively calm and quiet, but that’s not to say she has no personality. Even at nearly 11 years old, her eyes light up at the very sight of a tennis ball. When I get home from work each day, she nuzzles me for five minutes, tail wagging and head buried in my chest. Same for mornings.

As time passes, it becomes more and more apparent that my baby – my bestie, my pal – is aging. Her once char-black fur is now nearly completely white on the face, chest and paws. She has a scary looking lump on her right leg (don’t worry, the vet checked it out and it’s non-cancerous – she suggested I leave it for now) and seems to have a new wart popping up every week (there is a particularly annoying one on her forehead that sometimes falls off and then grows back). Her body just isn’t the same anymore – she used to be svelte and trim, but now she has a turkey neck and is starting to get an old lady bod.

These physical changes bother me – not because I love Daisy any less, but because I know they are merely symptoms of her now-geriatric status. They are reminders that as each day passes, I am one step closer to saying goodbye to my best friend forever. I try to remember to enjoy everyday with Daisy instead of lingering on the thoughts of losing her. For that is all we can ever do with anyone we love, isn’t it?

Training tips. Funny stories. Dog gear reviews. This site is all dog, all the time. 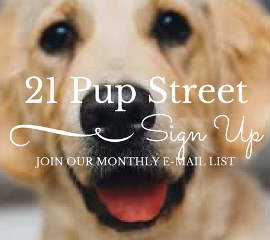